Just before the end of 2011, I went ahead and did a couple drastic things in an effort to enter the new year somewhat "cleaner" than I was before: I paid off my student loans, ditched my Big Bank for a credit union, and after considerable thought, deleted my Facebook account. 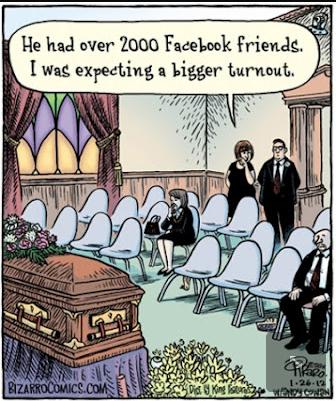 The Facebook thing actually happened because Facebook changed their rules (again). Suddenly, when someone "recommended" that I join a group, I was automatically added to said group -- a move that resulted in a new email sent to me every 10minutes or so: "Friend X said this on Facebook! Click here to read more!"

Imagine checking your email after only an hour or so and finding a whole wack of useless emails directing you to a site you detest... and now imagine blaming the friend for sending you those mails, rather than the contemptuous corporation that did so on her behalf without informing either of us.

That's the key to my disdain of Facebook: they use my friends to manipulate me.

I've lost count of the times I'd been tagged in a terrible photo, or was invited to join some game about zombies and vampires. I was "friends" with people I hated because not accepting their (constant) requests meant even more social awkwardness in real life than we already had, and despite all of the so-called connectivity Facebook allowed, I still had 50+ messages from people that roughly boiled down to: "How have you been?"

Facebook is a tool I never liked using. The interface was crowded and ugly, it innundated me with emails, and censored my posts (just try linking to the Pirate Bay). It cheapened my interactions with people I love, and was constantly pushing my friends to have me use it more and more.

So in a fit of logic I realised: I had friends before Facebook. For thousands of years people have managed healthy social relationships with people they like without the aid of amoral corporations. It followed therefore that I could conceiveably drop Facebook and keep the relationships ... at least the ones worth keeping.

And you know what? It worked. I don't miss that social vampire at all. If you really want to keep tabs on what I'm doing, there's still three sources out there on me: this blog, my many Twitter feeds [1], [2], [3], and Google Plus. And honestly, if you can't be bothered to read any of those, don't worry about it. We don't need technology to maintain our relationship.

This isn't a pitch to try to convince you to do the same. Maybe you like Facebook, and maybe you don't have issues with how they treat you and your friends. I just wanted to explain things better for those who might be curious. I will however, leave you with this:

Good for you, Daniel. Facebook is a horrible company with questionable morals, and the only power we have over them is our own behaviour. Unfortunately, they've done an excellent job of convincing people that we need them to stay in touch with our friends.

I'm not ready to make the break just yet, but I'm proud of you for using your consumer power for good! <3

PS: I am logged in but you are screening my comments. Just letting you know I am not a robot.

I do agree with much that you've said here. I find the games, ads and some people very annoying.

Personally, most of my FB are actually my friends (or family... lots of family!). And i have a couple of people that I find entertaining & interesting so I keep them on my list. A couple of people I have on FB are actually people who I lost contact with - and since we re-connected I've shared phone calls, emails and hopefully if i can time the weather correctly.. maybe even a trip to the 'Peg!!

My feelings on FB is that it is a tool - how you use it can determine if you like it or not.

That's the one thing I miss about Facebook actually: the sort of central directory for finding old friends. My googlerank is pretty good though, so I guess people can find me if they really want to.

I'm rarely on anything anymore. Just on FB to play a few games, but no true updating. But still have email and I guess it may be time for a blog update someday soon.

Looked for your profile, wanted to ping you on facebook about coming down to Amsterdam. Saw this post and disabled the account. I guess it was long time coming. One of the key developers at my previous job also does not have facebook, though he has skype with about 300 contacts.

Everytime I went on facebook I detested that feeling.

I did? Well I guess I felt, like most people, that Facebook was a vast improvement (in terms of interface and usefulness) over MySpace. They've since shown however that they're less interested in providing a service and more interested in social vampirism.

No wonder I couldn't find you on Facebook! Anyway, I don't really have a way to get in touch with you right now. I wanted to say 'Happy Birthday' somehow. Seems like a lot has happened since I met up with you last year. Since then, I'm happy to report that I have a full-time & still at school. Anyway, I hope you read this post. Send me an e-mail when you get a chance. It's been too long. >_<

Mostly on my FB is family, a FEW ACTUAL friends. I do not play games, I do NOT click on their stupid ads. I talk to my family(few friends). I only stay on FB because my family is all over the USA, and besides phone, texting, email I can see updated photos, and what's going on with my family. I will not accept the TIMELINE...There will come a point when FB FORCES me to delete my account. But right now I HAVE CONTROL..