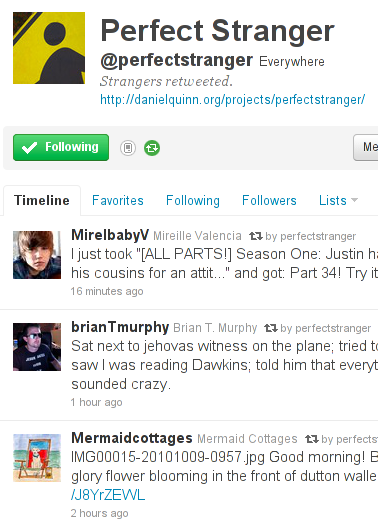 Social networking is doing some amazing things with our culture, but it's also reinforcing some of our worst habits. The most glaring of these negatives is the fact that while we're getting more and more information as-it-happens, that information is being transmitted and filtered by our peers. This means that our views on current events, politics, the environment, and even entertainment are increasingly being seen through a potentially distorting lens.

This wouldn't be a problem of course if people kept a diverse peer group, but by our own nature, we don't. Economically left-leaning people tend to associate themselves with other lefties, fundamentalist Christians usually don't spend time with Pagans or Muslims, and as we become more dependent on social media, this lack of connection to people who don't think like us can distort our worldview.

@perfectstranger is an attempt to re-balance that dispairity. Every hour, the account will retweet a random message from Twitter that adheres to the following rules:

To take part, you need only follow @perfectstranger, and feel free to tweet at us with your comments.

This project was the brainchild of Stephanie Hobson, and coded by me.