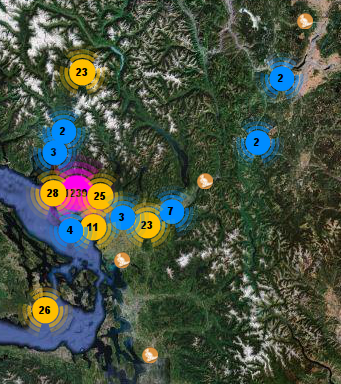 Gowallawalk was a site I built against the now-defunct Gowalla API. The idea was to allow ardent users of the location-based Gowalla service to visualise their location data on a map. Check-ins at all locations would be "globbed" by location so as not to overload the map, and users would be able to share the extent of their travels with friends and family.

On a technical level, the project made use of Python and Django at the server level, including a third-party library used to access the Gowalla API. On the front-end, I used Google Maps, and the MarkerCluster extension for the aforementioned clustering.

The site ran for about a year before Gowalla was sold to Facebook and was subsequently dismantled. With the API no longer functioning, I ended up re-working the site to be 100% static, with all dynamic elements managed client-side with Javascript.

Gowalla was awesome, and I was saddened to see it go. Gowallawalk was a lot of fun to build and it got a lot of praise from the Gowalla user community too, which was a really nice thing to see.