in an effort to recognise and encourage "green" behaviour in the city, mayor miller and joe pantalone setup the novel idea of awarding prizes to individuals and corporations who showed promise in the area of cleaning up this city on an environmental level. interestingly enough, winners of each category were awarded $5000 which they could then contribute to any environmental cause they wanted. it's bloody brilliant if you ask me.

the environmental volunteers were asked to show up so the mayor could thank us for our own small part in helping to clean up this city, and i jumped at the chance to attend. there's so much interesting stuff happening in this city, but sometimes you need to go to something like this to really see it all. 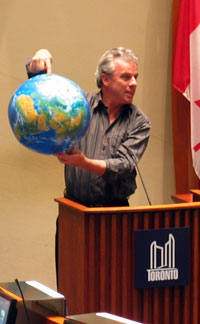 the awards opened on bob mcdonald, host of cbc's quirks and quarks. he was, as always absolutely fascinating and in very simple terms helped me really understand where all this environmentalism is coming from. he blames it on the 70s, when we finally hand the chance to stand back and look at the earth as it really was, a little blue ball in a sea of black. it was then that we realised how very fragile the earth is and how it's not a flat expanse of dirt, water and trees, but a series of interconnected spheres... and we know nearly nothing about it.

what really impressed me (and it should impress you too) was the fact that the focus of this event wasn't really environmentalism, but rather how people are doing the Right Thing in the world and succeeding. the winner of the "green design" category for example owns the Beach Solar Laundromat, a business running off of solar energy. through a system of thermal panels, high-efficiency fluorescents and a unique air-conditioning system designed for zero-exhaust and no refrigerants, he's reduced the emissions by 40%... and increased his revenues by 160%.

Jennifer Gordon won the title in the youth category, in grade eleven she's setup an environmental club at her high school that actually gets stuff done. they've planted gardens around the school and painted murals to curb graffiti. i met with her after the presentations and we talked about the difficulty surrounding the moving of people and she picked my brain regarding green roofs... she wants one for her school. this girl knows what she wants and she's got the skills to get it. she's going to do big things.

and FoodShare won in the health category for their effort to urbanise agriculture. they've managed to found a farm in the city of toronto on the grounds of the centre for addiction and mental health. "from field to table" the group orchestrates the production and distribution of organic produce around the city and the whole thing doubles as therapy.

beyond the fact that it was an interesting evening, it was also somewhat disturbing. the (lengthy) speech from severn cullis-suzuki had me questioning the source of power with regard to real change. why are certification programs like the forest stewardship council becoming more relevant? and why has home depot signed on with them? why are companies like enwave working so hard to find alternative ways of cooling the downtown core? what about the three examples i mentioned above? is it that the market is beginning to care about what environmentalists want because there's so many of us? i doubt it, i mean c'mon. we're no more than 10% of the population, most everyone else doesn't care and doesn't want to know anything the tv doesn't tell them. then could it be that enough of us have worked our way into power positions so that we can start making this kind of thing happen? well maybe, but home depot? the energy sector? corporations are directed by profit and i'm not seeing where that's all coming from for them. could it be that they have the forsight that unsustainable living is not profitable in the long run? perhaps... that's my best guess so far, but i'm still not sure. and what about government in all of this? does it even matter? ms. suzuki didn't seem to think so. am i going in the right direction then?

what i do have right now though is good news. lots of things are happening to make the air and water cleaner. ...i guess i'm just confused now 'cause i don't know where i fit in.

Grass roots with big dreams - that's where you CURRENTLY fit in! Are you on the right path? maybe - better question does it feel right to you?
Have you made a difference? Well you know the answer to that question........
And where do you go from here? - As speaking as one of your many friends, i know we're going to enjoy the ride that you're creating. But depending on your point of view either The Goddess has an interesting role for you, or you'll create one!

its not the matter of fitting in, it's a matter of making a space, a niche if you want that you're comfortable with. you're a leader of sorts, make your own direction and then the others will follow.

as for why home depot and other corporates are tagging in: it has to do with (political) power and the media. everyone's into the whole environmentally friendly thing nowadays. what better move for these companies than to claim that they're cool with that? it may only be a percentage of the pop right now that truly gives a damn but as the years pass, and what with kids growing up environmentally savvy - this kind of thing will impact their companies in the future. to back up and sponsor such environmental events is a good PR move.