There's some exciting stuff happening here in Cambridge. The county council (the tier of government between municipal and national that handles Cambridge and the surrounding smaller towns) has declared that they want to build what they're calling a "sustainable travel zone" around pretty much all of Cambridge proper.

In practise, this means that within this area, if you drive your car, you'll be billed to the tune of £5/day. There are a series of exceptions of course, ranging from cabs to emergency vehicles, but on the whole most drivers in the city will have to pay this fare every day they enter (or leave) the city. And yes, this applies to people who live inside the zone.

Understandably, a lot of people are upset by this, but I think that it's a great idea that's long overdue.

I'm going to rant on this for a bit.

Why charging £5/day per car in Cambridge is great

For nearly 70 years, most of the developed world has been asleep at the wheel (see what I did there?) when it comes to urban design to the point where private cars are seen as not just a necessity, but even a force of nature. When pedestrians are mowed down by careless drivers in this country, the conversation inevitably falls to victim blaming, asking "why weren't they wearing their government recommended high-viz jacket?" Discussions around cycling centre around the decorum of those who violate laws written for cars, while ignoring the drivers who violate those same laws with fatal consequences.

Cars kill 1.5million people every year and that's collisions alone. When you factor in the deaths from pollution and climate change, it's insane that we've entertained this pattern for so long.

On top of that, a society that privileges private cars (ie. nearly every country) necessarily excludes the poor, the disabled, the young and the old. That means that events like all candidates meetings and football games, or public parks and children's play areas place an unfair burden on people to own and be capable of operating a car or depend on having someone else drive them. People can be isolated by their partners because they simply have no way to leave the house, or feel "fenced in" by the pedestrian-hostile world outside.

We know all this

The thing is, everyone knows this is terrible. 9 out of 10 drivers will agree: cars are terrible for all of the above reasons. However, when it comes to actually reducing cars on the road, everyone thinks they're an exception.

Everyone else needs to get off the road, but I have to drive my kid to school! What am I supposed to do, send her on a bike? It's not safe!

This of course comes from the self-fulfilling prophecy: we built a world so dependent on private cars that we can't interact with that world safely using any other means. You can have a development without cycle lanes or even sidewalks and no one will bat an eye, but dare to skimp on the free parking and people lose their frickin' minds.

Ok I get it, so what're we supposed to do?

This world our predecessors built for us sucks. Accepting that, where do we go next? To my mind, you have to start with a collective decision around what we want to become, and the rational answer to that has to be: Amsterdam.

Clean, quiet, safe streets mostly used by pedestrians, bicycles, and transit, allowing for delivery and emergency vehicles and even the occasional (very slow moving) private car. That's a world where you can safely send your kid to school on her bike, the world where an 80 year old woman can choose to live alone and still buy groceries and visit friends independently.

I don't think it's unreasonable to say that most people want this. The problem mostly seems to be around the public's unwillingness to accept that this is even possible. I want to go through some of the more common objections:

We can't do that here! The Netherlands is flat. We have hills!

There are plenty of examples of good pedestrian, cycling, and transit infrastructure being applied in cities all over the world, but like anything else, we can tailor our designs to the geography. Many towns (like Cambridge) are flat, so a heavy cycling focus makes sense. Other cities (like perhaps San Francisco) are probably better suited to biasing pedestrian and transit corridors, or subsidising e-bikes.

That's unreasonable. They had the density so it was easy for them. We're too spread out!

This sounds plausible until you realise that the Netherlands looked like this in the 1970s: 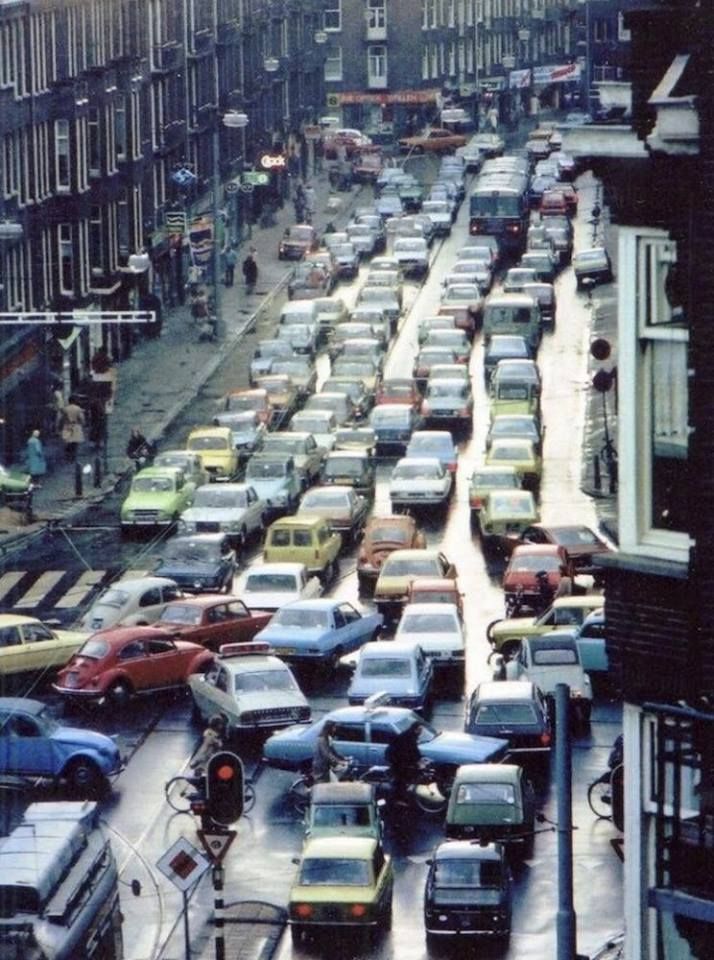 Cities change all the time. We can change ours, but we have to want it.

That's nice, but the Dutch don't do the same kind of work that I do. I need a big truck to do my job!

This is laughable to anyone who's seen a hydraulic crane truck hoisting a grand piano three storeys into the air on the Haarlemmerstraat. Nine times out of ten, small trucks do the work just fine, and for that last 10%, a work truck can always be acquired. You do not need a land rover to buy groceries.

My office is in a business park off the freeway. I have to own a car to get to my job.

This is a symptom of our failed design philosophy: the idea that everyone owns a car, so they "they can just drive" to my cheap office space. These far-away office parks don't make anyone happy. They're painful and dangerous to commute to, require expensive hardware (cars) to make the trip, and typically exist in "deserts" where you can't find food or child care, let alone nearby homes.

This model is bad for everyone and has to die. At the very least, it shouldn't be cheaper to subject people to this.

What about the suburbs & villages? Those people need cars!

Some people don't like living in a "city" like Cambridge and prefer to live further out where the land is paradoxically cheaper, but where you must own a car to go basically anywhere. That's fine, but we can't let their preferences dictate the structure of our community. If Cambridge wants to be like Amsterdam, these people need to be dissuaded from driving their cars into the city.

The £5/day charge will be applied to cars driven within a very large "sustainable travel zone" (STZ) on any weekday. The proceeds from this levy will be applied to expanding transit (frequency and routes & lowering fares) as well as improving/expanding cycle infrastructure.

In effect, this is a classic carrot/stick arrangement: you can drive your car if you want, but you're going to pay. However if you're open to alternatives, they're now faster, cheaper, and more convenient.

It's not a perfect plan. Personally, I would have favoured outright banning of cars within the zone, or at least extending the STZ to include weekends, but this is a step in the right direction.

There's a whole bunch of politics operating under the radar here that makes this all rather interesting.

Cambridge's mass transport, like all transport in the UK (excluding London) is privately held. There are a handful of bus companies managing separate routes charging exorbitant fares for notoriously unreliable service and they don't even allow transfers. It's a terrible system that's barely used and politically, no one has dared step up with a solution to fix it. Through this plan, these companies stand to benefit considerably, effectively absorbing a public subsidy for a private service that has historically not been provided well at all.

In other words, this might just be a case of politicians finding a way to soak the public for some money so that they can give it to their friends in some private companies. It certainly wouldn't have been the first time.

What's worse is that they'd be doing this with the blessing of active transport activists like Camcycle who have pinned their names and reputations to the project for support. If this is, as I suspect, a fleecing of the public purse, it could be terrible for everyone.

Why it won't happen

The plan is being executed by the Cambridgeshire County Council which is presently governed by a Labour/Lib-dem coalition. The Conservatives, who are largely elected by car-driving village dwellers will likely use this as an issue to beat their opponents in the next election.

That election is timed to happen just before the £5/day charge comes into effect, but after the public funds have been spent "bolstering transit". My inner cynic says that this is all designed to take that public money, give it to the bus companies and then fold up shop before the next election so they don't have to go through with it.

All of this is terribly disappointing, but even given the very likely chance that this is all a scam, I find myself still siding with it.

When it comes to building our cities to be clean, quiet, and safe for everyone, I'm going to support any plan that furthers that goal. If the alternative is letting a bunch of carbrains turn around and kill it ensuring that nothing gets better, I'll back any plan that gets us even a little bit closer to a better home.