I just found this on Spacing Wire and it blew me away. 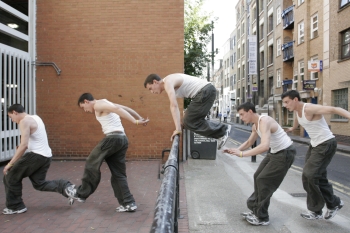 Apparently, someone has invented a passtime called Parkour, the idea that jogging is for the unimaginative, that instead, we should run, jump and play on anything we can get our feet or fingers on.

Instead of running down the street, these guy hop over fences, climb walls somersault over cars and fake out guard dogs while exploring the city in a way that should seem normal but is instead refreshingly exciting.

A couple Russian guys got together and produced a frickin' amazing video about this and posted it online. Watch the whole thing. It's worth the 8minutes of your time. (Google video)