In Defence of the Red Chamber

Canada's Senate has been getting a lot of flack lately from the suspended/disgraced former senators like Conservatives Mike Duffy and Pamela Wallin to most recently, moves by the Senate to block/amend/rewrite the Reform Act, a bill I personally think is long overdue.

Every party has a different idea of what to do with the Red Chamber. The Greens want to reform it by electing senators, the Liberals simply kicked all Liberal senators out of their caucus, the Conservatives want to elect them, but aren't interested in actually going through the process of getting provincial approval, and the NDP wants to outright abolish the Senate -- though they've been unsurprisingly silent on exactly how they'd do that in the face of a constitution that guarantees the Senate's existence.

How it Works Right Now 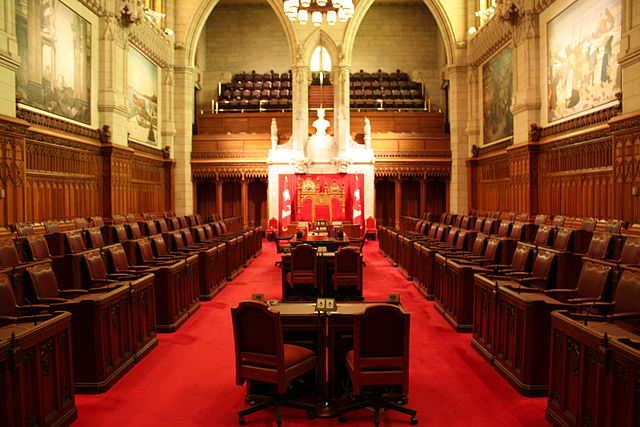 For those of you who don't know, this is how the Senate currently works in relation to your vote:

When Party A is elected, the Prime Minister might appoint 10 senators over the course of her term. When her party is ousted by Party B, the new party now has to contend with people in the Senate who might oppose anything too extreme, since they're from a different party. This is what is lovingly referred to as "sober second thought".

What the Parties are Suggesting

On the face of it, the Senate seems like an insane tool for democratic governance, and I won't deny the fact that there's a lot of room for improvement, but I want to go on record saying that I think the positions of all the major parties are deeply flawed here, and in the case of every party, self-serving:

I want to make the case that the senate is a good thing. That for all of its flaws, the purpose it serves is just too important to abandon (as the NDP would suggest) or politicise (as the others have stated).

Why Elections are a Bad Idea

The typical solution of "just elect them" is one that's already been tried and found wanting. For the test case, you need only look South to the United States where they elect:

The result is a deeply polarised society, with judges and senators less concerned about their jobs than they are about getting re-elected. A sheriff's sex life, rather than their track record is made relevant to whether or not they can enforce the law. There is no concept of "sober second thought" because every time a congressman or senator votes on an issue, they have to worry about "how this will play with the voters".

This isn't to say that all elections are bad. They are after all a pillar of democracy. No, I'm arguing that just as an elected governing body is crucial to democracy, a sane political process also requires the existence of a body that is not beholden to the whims of the public. The public is fickle, emotional, and historically grossly uninformed. Purely elected bodies are measureably less stable, more erratic, and more polarising.

This was the idea behind Canada's Senate, and it's still a good one: a place where people can come together and debate, amend, approve, and reject bills passed by the elected House. It's a check on the power of the House, which is beholden only to the electorate.

If you introduce elections to this equation, you undermine the whole value of the senate: the lack of fear in decision making. Worrying about re-election means worrying about the whims of the short-term: anti-science, religious nutbaggery, and war-mongering. All of the emotionally-charged issues underlining every political action based on recent events, presented outside of the broader historical context. This is is a recipe of instability and a tyranny of short-term thinking.

If we shouldn't abolish the Senate, and we shouldn't elect it, then what alternatives do we have? I don't pretend to have all of the answers, but if someone were to make me Emperor for a Day, I might propose something like this:

I'm curious about what others might think about this, and would invite other proposals -- anything to preserve the ideals of the Red Chamber while working to root out the cronyism we're currently saddled with.

One thing's for certain though, all of the major parties are making recommendations that are bad for the country in the long term, and unsurprisingly, they're all recommending policy that works best for them.

I agree with basically all of this but if I was Emperor for a Day I'd probably propose something else. (Maybe 20 year term elected positions which candidates nominated by the House? And candidates could not run under a party banner.)

I heard a really great CBC podcast on this but don't remember which program it was now. The biggest thing that suck with me is that, according to our existing laws the easiest path to reform is to abolish it and replace it. It's actually harder to amend it than it is to do away with all together from a constitutional law perspective. Which is a shame because I would rather see it reformed.

It's a pity you don't remember the name, 'cause I'd like to hear it. Your idea sounds good, but I'd still want the vote to be private. I just don't trust party whips.

The bitch about the abolition position is the constitution and the historic inability of the provinces to agree on anything in this area. There are a lot of sneaky ways to reform the process, like how Harper said he'd appoint senators elected by the provinces, but you're right, to really fix the Senate, it requires more work than abolition. I think it's worth it though.