there's a great silence over the city today. maybe even the country. most every Canadian out there is torn between helplessness and disbelief. can we say it together? four more years? the thought is heart wrenching -- at least for me. how can so many americans be so fucking stupid???

but there is a silver lining. behold: the map of the future: 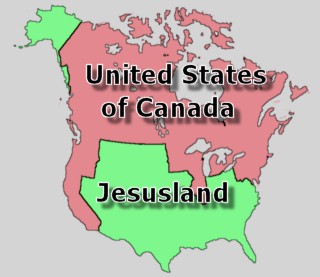 credit due to this girl who has some nifty commentary of her own.

i know, it sounds rediculous. but looking at the way things are going, it's not all that outrageous. when the draft comes (and it will) thousands of americans will be looking to Canada as a safe haven -- just as they always have. civil rights? well if you're gay and you want to get married, come to Canada! we are quickly becoming that which america pretends to be.

the rest of this post is only for people with some extra time on their hands. don't read on if you're busy 'cause it's just ranting. it's almost a complete copy of what i posted in lavendarglass's blog:

the market responded positively to kerry's consession, not in support of bush's leadership, but because stability == happy rich white folks making money.

but how this is going to affect Canada is whole other fun thing.

see bush has proved over the last 4 years that he's expertly skilled at ruining the country: unemployment: up. respect of trade rules: despicable. foreign policy: miserable. security: sad. and it shows in the economy and social structure of the country. people are more afraid, more angry and far poorer than they were 4 years ago. this has led to a cheaper dollar and economic collapse. no matter how much the bush administration tries to spin it, things are not getting better.

the american people (sadly, even the popular vote WHAT'S WRONG WITH THOSE PEOPLE?) have opted to keep monkey-boy in power, and for Canada, this means same old, same old. look for more blockades at the border, and more protectionist policies. but let me make this clear: this is GOOD for Canada.

for way too long, we've been america's bitch when it comes to trade and we've done this because it's too hard/expensive to expand trade routes with other nations. the usa is, after all the only country we have a land-route into. the more protectionist the americans get, the more we'll be forced to expand trade with more prosperous countries (read: japan & the european Union). our dollar is going UP against the flailing american dollar, and we can continue this trend if we expand our trading network.

unfortunately, their foreign policy will likely get even more scary and include military incursions into iran and more sabre-rattling wrt north korea. this part is as bad for us as well as the rest of the planet... and that's why i was hoping for kerry -- at least he seems to know what he's doing when it comes to foreign policy. i suppose that all we can do now is hope bush doesn't end up killing us all in the next 4years... because as we all know: all the gun-toting would-be assisin fanatics are on his side.

I actually have a couple of American friends who are currently looking into moving to Canadaland...

Hey, thanks for the link and compliment on my commentary... but for the record, I'm not a guy... :)

Anyway, it's nice to read the perspective of someone outside of the US for a change. I kinda figured that the American Kerry supporters weren't the only ones who were disappointed with today's results, thanks for confirming that for me. I tell ya, at this point in time I'm pretty embarrassed and ashamed to be an American.

i was watching the hits on my blog... 2 americans in the last hour... and i started to worry. i'm glad you were one of them ;-)

and thanks for pointing out that you're not a guy too! i've fixt the oversight. good luck in your country. here's hoping the left wins a few fights in the next four years... but if you don't, you're always welcome in Canada.

What the democratic party needs is a candidate with the following:

1) The charisma of Bill Clinton
2) The smarts of Al Gore
3) The hardcore never-give-up, never-give-a-damn attitude of Stone Cold Steve Austin

The Democrats need a candidate who rides in on a wideglide harley, drinks beer, gives the finger to those who don't like him, looks good in a suit or combat fatigues, has no problem flying into afghanistan into the dark of night and laying into terrorists himself, and tells it like it is.

Sadly, that will never happen, the old Democrats will never let it happen.

from what i've heard, hillary clinton will likely be the next democrat candidate for president... what do you think about that?

I think Hillary Clinton has more balls than America will ever need and would make an excellent president. Unfortunately I don't believe the majority of Americans will 1) vote Democrat, and 2) more importantly, see past her gender. Americans aren't ready to put a woman in the White House who isn't a First Lady.

I'm particularly a fan of this comment, seeing as I grew up in Alberta (and agree that overall it ends up Jeebofascist by Canadian standards, and do find that largely unfortunate):

As a native (if long-gone) Albertan, I think Alberta firmly belongs in the USOC. Its two urban centers are more libertarian conservative than cultural conservative, and someone running against socialized medicine couldn't get elected dogcatcher. It only seems Jeebofascist by Canadian standards...

While I'm procrastinating, I might as well be thorough about it. Someone on IRC suggested that we should raise Albert Einstein from the dead and convince him to be president of the United States of America. This was quickly shot down the the realisation that he'd very probably kill himself first, to say nothing of the fact that nearly nobody (republican) would ever consider voting for him, and probably a goodly number of democrats, too...