my inner masochist won out today as i decided to go for a walk... to yonge & eglinton. for those who aren't familiar, that's a very long walk from where i live downtown -- in the area of an hour and half... uphill. but i'd never done it before, and every time i whizzed by on the subway, i had this nagging feeling as if i was missing something above ground.

well i don't think i was missing anything, save a lot of concrete. i did however have an opportunity to experiment in civil (or is it social) education:

i was walking north up yonge when i came upon a shiny new mercedes sitting in the right-hand lane with it's hazards on. the obviously "very wealthy, yet too good for pay parking" driver had decided that finding a parking spot was for losers and that she could just leave her car in the middle of the road while she ran in for a pack of cancer sticks. i was glaring at the car with that deep, ugly feeling you get when you think about those morons who drive slowly in the fast lane when the car's owner, a tall, slender blonde woman came out and hopped back into her set of overpriced wheels.

she then continued up to the corner of college & yonge where she had to stop at a red light and i crossed the street in front of her. she then unwrapped her brand new cigarettes and chucked the garbage out the side onto the street. i was appalled. i don't care who the hell you think you are, this is my city too, not your landfill. i stopped in the middle of the street, walked over to the rich bitch, picked up her trash, tossed it back into her lap and walked off.

but the sad part is she didn't seem phased at all. she just picked the junk out of her lap and tossed back into the street as i reached the edge of the street and the light turned green. apparently, toronto really is her landfill. 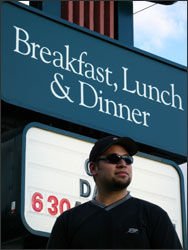 i spent a good deal of my very long walk thinking about how i could have done that better. how could i have been more effective -- something to consider if the opportunity arises again. i considered the rude approach: "listen here lady. this city isn't your landfill. get a garbage bag for that overpriced heap", but i can't imagine that being helpful. there was the passive-aggressive, tossing it in the backseat -- equally ineffective. i settled on a polite but obvious approach. "excuse me, but you dropped this. please keep your garbage off of my street"... too bad this was decided about 15 blocks later.

so how would you have done it? is this just futile? do you have a better suggestion? toronto is the laughing stock of the country in its inability to manage its garbage habit, are we supposed to just sit by and let these people maintain this?

mwahaha, dude! i dont think i have a better suggestion, but that was excellent!!

you called pickels "angel" under your decribtion of pickels... angel is not the bitch queen... that is pickels... what a stupid cat... pickel... not my darling angel

oops. sorry dude. i've fixt the reference to angel as the "queen bitch" on both pictures of pickles.

[rant]
first of all, i'd like to point out that while my blog is open to comments from everyone (except filthy spammers) the latest post is not meant as a breeding ground for irrelevent questions or topics. first it was natasha posting pictures to the pride parade in the voting day post, then it was sheena wanting a virus scanner -- and now you're claiming that my imager is broken. it's not and this is not the right post to be mentioning it -- if there is a posting at all. a Better Idea would have been to just email me or find me on msn/icq/yahoo/aim so i can help you out in real time.
[/rant]

as it turns out, the imager's not broken. i logged in with your username/password just fine no more than 5minutes ago. chris rhodes did it a couple of days ago as well without issue. so the problem is likey user error. please take a second to find out what might be wrong on your end before automatically assuming that i wrote a broken script, released it to the world and made it available for download. chances are, you just have an extra space in the name or password, or you're rejecting cookies from that domain or something. running zonealarm? i've heard it tends to mangle cookie requests if not setup properly.

uhh... mr. Grumpy-pants...
CALM DOWN!
talking about the blog here, NOT the imager...
I go through the login procedure and then it does not log me in (and yes I refreshed and all that crap... I'm not a total idiot.)
BREATHE
sheesh
~J

alright, alright. i'm sorry, my bad. 'course it might have been helpful had you pointed out that you were talking about the blogger and not my imager. acording to my logs, people have been logging in for days -- but only with their cookies (ie. they didn't ahve to actually use the login script). you're right, something appears to be broken. i'll look into it today, my guess is that it has something to do with the dns change.

'course this doesn't negate the fact that your post was still misplaced. comments aren't really the place for bug reports. my email inbox is.

found and fixt. thanx for the bug report. just imagine how fast it would have been fixt had i gotten an email about it and all the details a couple days ago.....

geezzz dude... that little rant of yours made me think... dan reallys needs to get laid... if you were getting some regular sex i think you'd be a much more relaxed fella... people not using my bloggy thing properly... who cares... i'm getting laid... and i'm sure u would have been able to come up with a better way to deal with that polluting biatch, if you just had gotten laid that morning... dr. chris' advice... go take two healthy doses of "doing it" and call me in the morning

"dr. chris' advice... go take two healthy doses of "doing it" and call me in the morning"

no no chris! you got it wrooong! shouldn't it be - go take two healthy doses of "doing it" and call me in the late late afternoon? =) we all know dan and mornings don't mix and uh hello, morning sex? haha

Hey Dr. Chris? Can you wire Dan some money so he can fill that prescription of yours? :D

Well... Dr. Chris would wire dan some money for his "medicine"... but i'm not sure dan should have to pay for it... ya know... shouldn't it be covered under his medicare???