i've been meaning to blog about this for some time, but i've not really had the chance until now since my computer's been in the process of installing. i went to see jack layton and David Suzuki give a talk on Sustainability Within a Generation this past saturday at the university of toronto. jack was there representing the ndp and to point out the fact that his party is the only one in the house of commons with a plan to implement Kyoto. the liberals say they support it, but have done absolutely nothing to see it happen, and the conservatives are dead against it. the ndp plan is cohesive and does what every other party is afraid to do: it considers the total deficit we, as Canadians bear. we have an economic deficit, but everyone else ignores the environmental one -- and it's costing us millions each year in health care and resource management. take ten minutes and look it over, what they're saying makes sense and they need your support to make it happen.

but we didn't go to see layton. we all came to see David Suzuki, one of our great Canadians and hero of the environmentalist movement in this country, and he had one message: this thing people call "the connect". 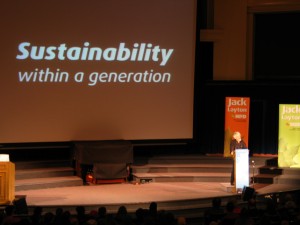 you see, David's all about the nature of things. who and what we are, and our relation to the world around us. where you see "the environment" as an external thing, something separate from the rest of us, he sees the interconnectedness that ties us together. he went into great detail about the science behind breathing and how a single breath from my lungs will reach every person reading this blog one day. what separates each of us is not empty space, but actual matter that flows in and out of every living thing on the planet... and that's what he's trying to explain.

but too many people "don't get it" he says. he once did a show on asthma in Canada and took a few cameras down to a toronto emergency room on a heavy smog day to see the results. hundreds of people pouring in with breathing problems, some very serious. parents were bursting into the room panicking because their children couldn't breathe, clueless as to what could be causing this... and they drove them to the hospital in their new s.u.v's.

smog isn't "just there". you and i put it there, and like it or not, it affects everyone and everything.

his big message was to think about everything you do. think about the consequences of your actions and the actions that provide the things you buy. inorganic cotton is the product of heavy pesticides. and a banana in winter requires an insane amount of fossil fuel to be shipped to your local grocery store. everything you and others do has a direct effect on our environment and if we don't make that connection, we're all going be in trouble.

right about now you're feeling either hopeless or apathetic. "what can we do?" you might ask. well David's got a plan. it's called The Nature Challenge and it's easy. no, you don't have to erect a windmill in your backyard or live in a cave to be sustainable. you only need to do three of these things:

you can also sign up to say you're participating and give the foundation the numbers they need to pressure government into doing what needs to be done. if David can go to stephen harper with a list of 1million Canadians supporting this plan, i'm thinking we could get the conservatives to reconsider their position on Kyoto, and that would be one hell of a step in the right direction.

update: you can download full-length videos of both jack layton's introduction as well as david Suzuki's speech on the ndp site.

well, i figured i'd do 3 others and conveniently skip that one (you only need three after all) but i'll tell you what:

if you and two other people do this nature challenge, i'll skip out on meat one day a week. breakfast, lunch and dinner. it'd probably be good for me anyway.

You're on, Dan. :) And the no meat for one whole day is an easy one for me. Usually there are at least 3 days a week I don't eat meat.

alright well that's two... any more takers? don't forget to sign up for the challenge on the site so they can get the numbers they need.

do you think i should do it? or should i hold off until i'm feeling better?

i don't see why not. you're not being asked to give up healthy or even cheap things. you could pick any three of these:

Well if you need a third for a challenge......... mind you I signed up for his program over a year ago (and yes I gave up the meat for 2 days a week! so there, the first day is easy, the second...) Just think how money you'll save that can go towards your next palm pilot!

he needs a new palm? what happened to saving up for a trip back home? :P

ok, i already reduce home energy by 10%. i don't turn on heat and i usually sit around with no lights on. my cooking time is limited to 5-10 mins. the only thing that uses up a lot of energy would be the laundry and that is done during the evenings once a week depending on load.