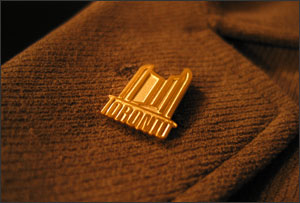 so i just got out of my first listening to toronto meeting and i'm typing this up in the nearby eastside mario's. i thought that now would be the best time to blog about my experiences there rather than wait 'till i got home and formatted the few pictures i took.

overall, the experience was positive. don't get me wrong, i'm still a cynic when it comes to public involvement in any level of government, but after today, i have a feeling that at least the gist of what i'd like to see happen in toronto just might come true.

the setup worked like this: about 1000 people pre-registered and were assigned to tables, where we were asked to talk about 3 big subjects. how to...


yeah, i know, sounds cheesy. but i found some interesting stuff. for one, everyone at my table was an environmentalist. what's more, so was nearly everyone in that room.

our table covered a variety of things, ranging from growing more food in the city, to repealing the bylaw banning street hockey (who the hell thought that was good idea? this is Canada!)

the city was well represented at my table. we had an elderly woman living in subsidised housing, a wealthier couple from the rosedale area, an older woman who had concerns, but didn't voice them well, and a rather vocal guy who was bent on pushing a single issue: the front street expansion.

conversation was civil and everyone seemed to know a good deal about the things they cared most about. this was the big test for me. i decided that if i was serious about any of my four ideas for toronto, that i should be able to pitch them to this small group and see what they think. i centred in on the most controversial: a deposit system for the lunch rush to eliminate garbage in downtown for those hours. we all agreed it was a good and viable idea, so it got added to the list of our table's recommendations. this list was then collected and sent around to some organisers, where they concentrated ideas into central themes and presented them back to the group later.

and 15minutes later, there it was, among the list of other excellent ideas for greening the city:


it was kinda eerie. and a little scary too.

we covered a lot of topics there, but the environmental part was the one i'm most devoted to, so i won't bore you with the rest. i will however mention that the end of the meeting had everyone filling out little slips of paper which would be delivered to their council member. i sent a very general overview on my 4 ideas to kyle rae with an invitation to email me for details. who knows -- he might just respond.

i think i did learn something else important here though. the guy who was sitting next to me, the one i identified as "vocal concerning the front street expansion". he was well informed and seemed to know more about a lot of things in this city, but i don't see his approach working (if you're reading this, please don't take offence) he comes across as very aggressive and single-minded, managing to put off even me at times. in my own adventures in city politics, i hope i never give this impression to people with clout.

there is continuing discussion surrounding the budget in the coming weeks. i'm not sure yet how i can proceed from here, but i think i know who to talk to find out. i will keep you posted.