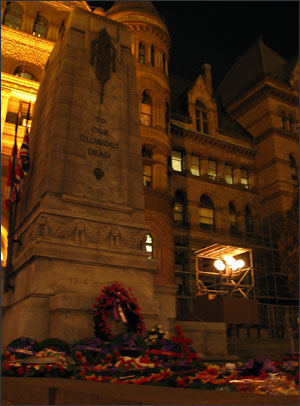 my thinking surrounding november 11th has changed over the years. when i was younger, i used to think it was damn near insane to decide when to end a war based on the convenience of the date. later, i came to see it as a day to stand back and try to understand the need for war and to honour the soldiers who died and the causes they died supporting.

nowadays though, i see it all a bit differently. as Canadians, we don't glorify war. it's not something to be idealised or shrink wrapped and sold to your kids. it's a messy, lethal business -- a business conducted by one class, while executed by another. words like "glory" and "honour" are thrown around to make it more and more like a hollywood movie, but in the end the concept is distressingly simple: young men and women, believing in a cause, fight... and many die.

the trick i think, is not to label this. our grandparents didn't "fight and die nobly in the heat of battle". they were just kids who had the courage to put themselves out there and maybe help keep their loved ones safe. they committed all that they were to a cause, an idea, or even just a word. that's not poetry. that's what it means to be human. and that's what i'm remembering today.

Sorry to comment off topic, but did you know danielquinn.com has expired? Care to snap it up? ;) And what's Daniel Quinn the author going to do now?