This is a story about something that didn't seem like a Big Deal, but turned into one, but eventually wasn't a problem at all.

Anna has a favourite thing: rocks. This girl cannot get enough of them. Ever since she was 1 and I was taking her for a walk/tumble around town trying to wait out the pandemic, she would be captivated by gravel driveways and pebbled flowerbeds.

As she's gotten older though, (she's almost 2½!) she's gotten more adventurous. Christina will take her for walks through the bramble fields near our home so she can collect roughly 1kg of rocks in her bucket and then proceed to throw them into a the pond. These days, she doesn't settle for just a gravel drivway, no. Now she jams her tiny hands into any pile of mud or cluster of bushes, trying to capture her own Best Specimen.

As you might imagine, that's not exactly a safe thing for a toddler to do. She doesn't understand what thorns are, and is still working out basics like force and momentum. She'll fall flat on her face, jam her hand deep into mud, and often scratch herself on one thing or another. Generally I chalk it all up to learning through doing though: so long as her injuries aren't life-threatening, I'm happy to see her get hurt. It means she's learning.

That was, until last week when she came home from yet another romp through the brambles howling like the world was ending. The poor girl had a splinter, a bad one at that. Somehow she'd managed to get a long, thin piece of wood jammed right from the tip of her thumb to just above the nail bed. It was long, barbed, and just under the nail so you could see it, but removing it was impossible -- even if she weren't squirming and screaming the whole time. I did try though. It was not appreciated.

Out of an abundance of caution, we decided to call 111, a free service here in the UK that fields dumb medical questions when you don't want to bother a proper doctor. You call them, explain the situation, answer a few questions and they either refer to you a doctor or give you some basic advice.

So while Christina was trying to calm Anna down with some Hilda (as an aside, you should absolutely see this show if you haven't already. It's great tv for kids and adults), I was upstairs on the phone with a nice woman who was kind enough not to laugh at me when I told her I was calling about a splinter. She took my information and told me she'd get back to me later that evening. This was around 1830h.

After Hilda had worked her magic, Anna was able to get to sleep. I guess the pain had subsided or at least dulled a enough that she could ignore it. Christina got her down around 1930h, and at about 2100h, we got a call back from a paediatrician that asked us to please bring her into the after-hours clinic. Apparently, this was a bigger deal than it sounded.

We woke the kid (she was not happy), called a cab, and headed over to the hospital only to find that due to COVID, only one parent was permitted to bring her inside. I would have to wait outside in the cold (good thing I brought my warm coat).

So while Christina was inside (they moved them to a private room, rather than keeping everyone in a big waiting room) trying to keep Anna calm and prepping her for what was coming: doctors, cold hands, probably a little pain, I was pacing outside trying to keep warm and entertained with my phone's dwindling battery life.

Two hours and one bird-shitting-on-me episode later, they came out with an excited and very chatty Anna and a bottle of antibiotics. Apparently this was a Big Deal: there was a piece of foreign organic material stuck in my kid that couldn't be removed which posed a serious risk of infection. She would have to have surgery to have it removed, complete with general anaesthetic, since there was no way Anna would tolerate both a couple of needles in her hand and some stranger cutting open her thumbnail. Everything was scheduled for a few days later.

On surgery day, Christina took Anna in on her own (no sense in my going since I couldn't come in with them) and I waited at home, working like it was a regular day. Christina kept me updated over Signal complete with pictures, and Anna came through the whole thing groggy and grumpy, but totally fine. She did however have a massive bandage over her entire thumb, but she adapted to that in a few hours.

The bandage came off on its own today (it's been almost a week) and we've got another doctor's appointment tomorrow to check on it and make sure everything is as it should be. I had a look though and the doctors did a great job. They took as little of the nail off as possible and it's already growing back nicely.

The NHS is beloved in this country, and it's easy to see why. Exceptional medical care was offered in a timely manner, all covered by public funds. Had we lived in a less-developed country like the US, Christina and I might have looked at each other and said: "It's just a splinter. She'll probably be fine" rather than risk the costs of a hospital visit. Had the NHS doctor's concerns been realised at that point and she'd developed an infection, things could have been Very Bad.

The NHS is wonderful. It should be funded properly. If you vote Tory, kindly go fuck yourself.

Not long after we were told that she'd need surgery, I hopped on Amazon and bought Anna a pair of these to aid in her future exploits. Hopefully, we can get her to keep them on while she forages to prevent this from happening again.

She'd better become a geologist, botanist, or something. A story like this isn't nearly as endearing to tell when your kid becomes an accountant. 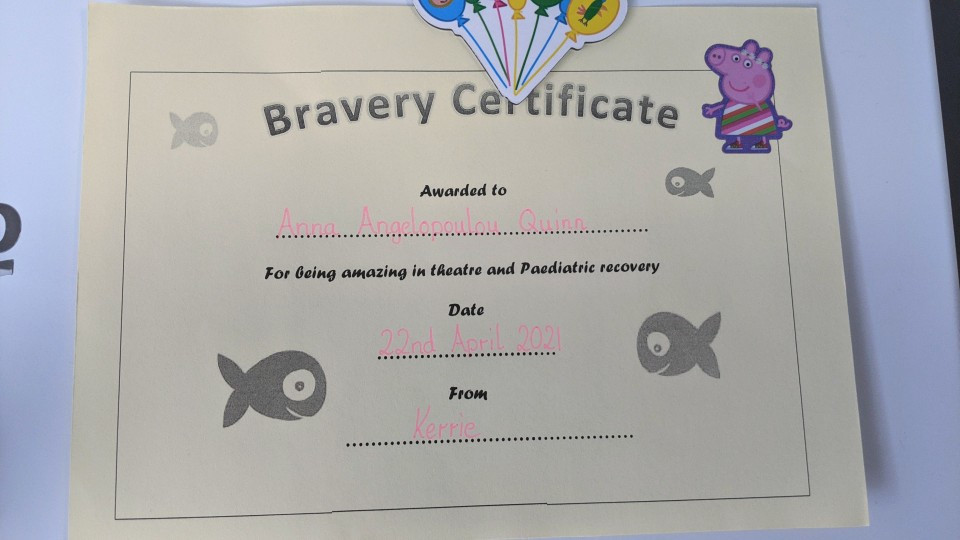 Re: US medical care. Since you and Christina are working, you would receive healthcare benefits from your employer. At this point, you would have taken Ana to an Urgent Care Walk-in Clinic and paid a $15-20 co-pay to have her splinter taken out. If you got to Urgent Care and they felt it was something beyond their abilities, they would have referred you to the hospital.