The Day We Killed a Blow-up Doll to Protest CCTV

In an effort to draw some attention to the CCTV problem downtown, my campaign did up some street theatre where we murdered a blow up doll complete with fake blood. It was fun. Here's the plan, as laid out in our Facebook event:

We will gather at the Tim Hortons, discuss the plan, then leave separately to our designated starting locations. Shayla the blow up doll will wander up the street when the rest of the "suspects", dressed similarly, converge on her.

As everyone passes her, we'll burst a plastic bag of red (water-based) paint will burst on the doll's chest and Shayla will scream: OH MY GOD! MY BLOW UP DOLL'S BEEN STABBED! (complete with flagrant hand gestures etc.)

The suspects will continue in their original directions spraying more water-based paint along the sidewalk showing their direction until they move out of view of the camera (either into an alley, or a crowd.)

While this is happening myself and other interested volunteers will be handing out pamphlets designed by our brilliant graphics guy explaining what's going on and directing people to the website.

Lastly, the "real murderer" will make a confession on Speaker's Corner explaining what's just transpired, directing viewers to our site as well. 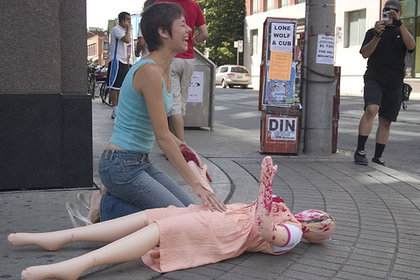 Well the grand plan didn't work out exactly as I had intended, but it was fun nonetheless. Firstly, there were fewer people around than I would have liked, but it's what you can expect on a Saturday I suppose. Secondly, my choreography sucked and our use of less-damaging Silly String instead of paint meant that a lot of the colour of the thing didn't work out. Lastly, I printed up the wrong set of brochures so what was distributed was the version with the draft copy instead of the properly proofed copy and it showed.

With the negative stuff out of the way though, it was still fun and we may still make a valid point. Shayla (the mourning friend) was fucking amazing. Her screaming and improvised (yet high-larious) cries had me laghing my ass off. We'll have to request the footage from the cops and see if anything was really captured and then do another press release explaining how the cameras couldn't have prevented this even if it was a real killing etc. I can't wait to hear if we get any fun press around the Speakers Corner bit. That'd be nifty.

Anyway, if you haven't seen them yet, here's some snippets of what happened. Stephen took some great pictures with his shiny camera and posted it all in his Flickr account, and Torontoist did a story on the whole event:

...and that pretty much marks the end of my career with the Toronto Public Space Committee. It's been amazing and dare I say, "life changing" experience. It's a hell of a feeling being able to engage City Hall and tell the mayor to his face that he's doing it all wrong. Sometimes they listen, most often they don't, but sometimes... you make the world better. ...and that's hard to beat.