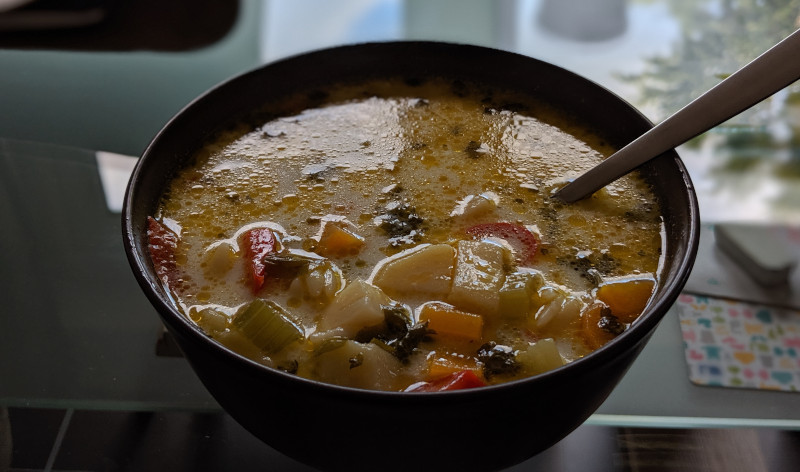 This is my second attempt at documenting my Grandmother's so-called "sour-soup" or "chorba" as is apparently the appropriate word for it. I've been trying to replicate it for years, but recently, she and I sat down and worked everything out (while i video recorded everything) and I've finally managed to reproduce this amazing dish. I present it now for you in the hopes that it will brighten your day too:

Note: my grandmother isn't big on measuring, so I'm afraid I don't have much to offer in the standardised quantities department. Instead, I'll be listing the ingredients in the very same way she provided them to me: in practical use cases.

This is a two-part system, and it's probably best if you do things one at a time. Pros like my grandmother who have been doing this for 50 years can do things in parallel, but if this is your first or second time trying this out, pace yourself and do one pot at a time.

Throughout this whole process, it's important to note that the pot should always be covered, or you'll lose too much water and you'll end up with a more stew-like soup than you probably want.

In this group you have:

You chop these into big pieces, no less than 7cm long. For the onion, you just cut it in half. Leave these bits on the cutter board 'cause you'll need them soon.

In this group you have:

These are all chopped into bit-sized chunks. Put the chopped bits into a great big bowl for now.

You need to quickly cook the meat to seal in the good stuff, and you also want to clean the ugly bits out of your soup before you actually start making broth so...

Now with the stock pot simmering on the side, we're going to work on the veggies we intend to eat.

Going back to your stock pot, it should have been simmering there for a good 10-20 minutes. It's time to remove everything that doesn't belong.

At this point, you've got a pretty functional soup, but it needs something starchy, like pasta or rice, so let's do that.

If you're going the route of orzo or rice, I highly recommend that you rinse it first to get off all the excess starch. Otherwise you risk clouding your soup. It won't taste bad, but it'll be less pretty.

If you're going the noodle route, you'll want to break it into tiny pieces so it's easier to eat.

Either way, dump your chosen carb into your soup, cover it, and let it boil at a low temperature until the pasta/rice is ready.

At this point, the soup is edible, but not yet exciting. You need to add all of the lovage and parsley at this stage:

Finally we're ready to eat. Portion out the soup into bowls, and just before you serve, stir in a spoonful of sour cream. I can't tell you how much better this makes things.

That's it! The portions listed above should serve about 4 bowls, but I usually double things so we have enough soup for a few days.

i wanted to see a picture.... but wow a labour of love! sounds really good to eat!

Well it took me long enough to include one, but there's a picture now!