A Brexit Conversation Part II: Yet Another Extension

Stephen popped up on Twitter today asking about Brexit again:

Another delay?? I thought there was a new deal.

I took a few minutes to write out a somewhat lengthy response, and after I was finished, realised it probably made more sense as a blog post so... Here it is, my ranting update about the state of all things Brexit here in the UK: 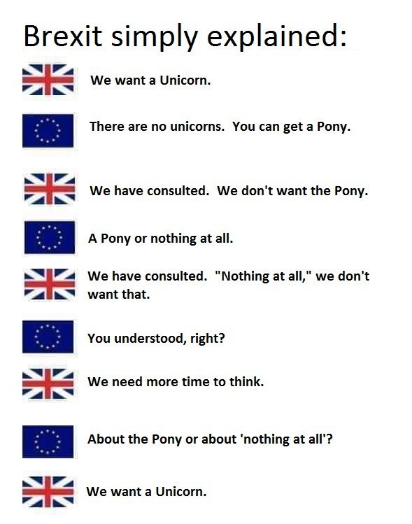 There was a deal, but it was a bad deal (actually it was pretty much the same as the previous deal, but this time it came from BORIS, so it's "new")

Basically Brexit is a mess because democracy:

The Brexiters all have a different definition of what "leave" means:

You may have seen a meme going around, where the UK wants a unicorn, and the EU says "those don't exist, but you can have a pony" -- that's basically the best explanation out there.

The UK wants to leave, but not tear apart Ireland, which is impossible, because a core component of the Good Friday Agreement was that there be no barrier dividing Ireland.

They also want to leave, but have a free trade deal with the EU. The nature of that deal again varies from MP to MP, but mostly they want a deal that lets them freely export to the EU without customs checks and without being a member of the common market... also, they want to be able to sign their own trade deals with other countries. That'll never happen because the EU can't let the UK be a vector for importing uncontrolled goods into the union.

So basically the only deal that could possibly be arranged with the EU is the one that May worked out a couple years ago, and that Boris has re-branded as his deal. This deal doesn't go far enough for the disaster capitalists, and it doesn't keep us in the EU, so it can't be supported by remainers either. As a result, the deal can't pass without another referendum on it.

SO that leads us to the next stage.

Labour has said that they want a referendum on whatever deal is struck between the EU and the UK. The nature of that referendum question might very well dictate the future of this whole mess. It'll likely fall along one of two lines:

At the moment, it looks like the disaster capitalists are working hard to re-frame "no deal" as "getting Brexit done" -- which is a lie of course. Exiting without a deal simply guarantees that the very next day negotiations start with the UK trying to hammer out a deal from outside the union. Only now it has violence in Ireland, and food & medicine shortages to deal with as well.

This may all be an attempt to get ahead of a referendum choice where people, tired of all of this politicking, vote "just exit already" out of ignorance, thus fucking the country and nicely making it their own faults while the disaster capitalists move to Malta.

Oh, and there's lots of talk of another election. The hope being that each party can get a majority to do what it wants. Boris is a disaster capitalist, so he wants to exit without a deal. Corbyn has stated that he wants a new referendum with remain on the ballot, and the Liberal Democrats say that they won't bother with a referendum and would just revoke Article 50.

The truth though is that a majority for any party is very unilkely. The Conservative vote is split by the Brexit Party which also wants an immediate exit, and the media here has been whipping up fear of Corbyn since he took the job. The Lib-dems are very unlikely to take a majority, but are unwilling to prop up Corbyn's Labour -- even on this one issue alone.

Everything is fucked. So we do the only thing we can do: kick the can down the road and hope that somehow, the British public will see past the tabloids and decades of underfunding education & social safety nets that would have helped them to not be fucking idiots when it comes to their most important political and economic partnership.

I don't have a lot of faith, but thankfully, the EU is patient... for the moment anyway.